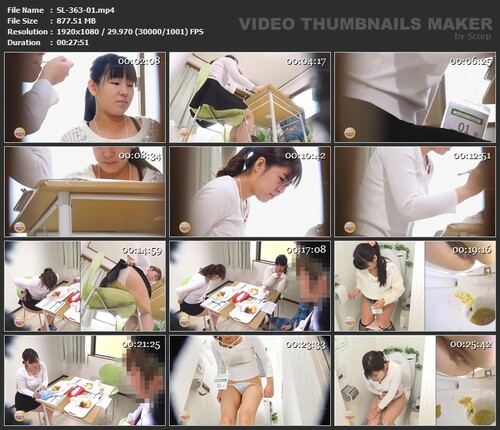 The “tasting party monitoring” is held in various places in Tokyo where various menus are available. You can earn good money just by eating the cooked ingredients and giving an impression. However, the actual situation was bad and a powerful laxative was mixed in the food to be tasted, and the original purpose was not to capture a feeling of the taste but a plan to expose a excretion of feces discharged by women. They don’t know and carry a powerful medicine from one to another to the lower mouth. As they continue eating, the laxatives gradually becomes effective and you can notice abnormalities in the body. However, it is not a situation where you can go to the bathroom, and it is not an atmosphere that you can say that you want to go. She behaves as if she cannot endure her stomach ache, but she gradually becomes limited and her appearance is strange. They pray that it will end safely. Anyone who manages successfully rush to the bathroom in time is good, but those who throw off feces on the spot are screwed… Take a look at the greatest and biggest shame in the lives of these women.